A touch of Africa

Every year my Mom sends me table clothes with different paintings on. They all have an African theme and I do love them as they keep me connected to both my family back in South Africa as well as the country of my birth.
So I decided to do a canvas of one of the pictures... first I needed to make a stencil of the items I wanted which was the African man and lady. I then chose a Zebra and as well as the African pots.
I bought Zebra printed serviettes ( x 10) which I used for the edges of the canvas.
I measured 11cm in from the edge of the canvas and drew a pencil line all around the canvas. I then drew 1cm in towards the edge - that 1cm that I had just measured, I painted black as my boarder around the canvas and my edging of the Zebra stripes. I put masking tape down to get my white boarder. this helped me with my lines. It was important to see that they where straight.
The centre ... well I mixed a moss Green (Jo Sonja's Artists' colour) with Green Deep (Chromacryl)
but I kept thinking it wasn't the colour I wanted but the more I applied it to the canvas I began to love this colour. Once the paint was dry I took of the masking tape. I then taped down the stencils of the figures where I wanted them and sponged the paint on through the stencils. My first attempt I did my African figures in Burnt Umber (Chromacryl) but when it came to the grass I did it in raw Umber (Chromacryl). I really didn't like the picture so out came the gesso and I covered the picture and re-did the background colour with the same greens that I had mixed before (helped that I had over mixed) but added colour to my African Figurines and the pots. What I loved about the change is not only did it brighten the picture but it seemed to bring it to life!
Yes less is more so this time I did less grass under their feet and did a Zebra in the bottom left hand side but only half the Zebra so that he doesn't draw your eye away from your African people. 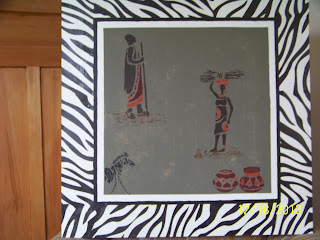 Had a blast, hope you enjoy!
XXOO 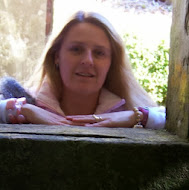 Who am I... I'm nothing with out my wonderful family and friends!! I married the most fantastic man in May,1997. Steve has been my rock and stands beside me no matter what my quirky wants or needs are... We have 2 beautiful boys Travis (15yrs) & Ethan (11yrs). They always bring inspiration into my art work...

I can't call myself an artist, I'm an amateur traveling down the training train to be an artist in a world with many inspiring artists to follow!! Being in New Zealand I've gone from strength to strength and am no longer just doing scrapbooking. Before leaving South Africa I had never discovered the wonderful world of Mixed media or journal... WOW what an amazing new art form and how I have learnt and grown!! Being in New Zealand I have discovered the most talented friends that have helped me grow as a budding mixed media & journal artist... Loving my new home in New Zealand!!

hen I first started I had little to no idea how much I would learn to love this amazing form of art. Yes, it most certainly is an art, it takes talent and yes we all learn from each other no matter how small the detail it is we learn all the time. "Each day we need to learn & gain pearls of wisdom, no matter what we are learning in!" Steve's gran mother uses to say that to me and I will never forget that and in my journaling, scrapping or mixed media I'm always looking to learn something new.

In 2008 we immigrated from Johannesburg, South Africa to uch to my delight I found a store that sold scrapping supplies, so I knew I would be happy! Little did I know just how happy I was going to get:)